I’ve not posted in months.  I blame it on the Templeton Religion Trust who 15 months ago gave me and Marty Seligman (former president of APA, founder of positive psych, one of the most influential psychologists alive today, [insert further accolades here]) a couple hundred thousand dollars to explore an idea that I’ve been obsessed with for the past decade.  That grant just ended in a raucous celebration of sleeping.   For the next few weeks, I’m writing a series of posts with three purposes:

The series won’t make much sense without knowing what primals are.  So, for those who don’t know, post 1 is a quick recap on the idea I plan to spend my life studying and why funders have been interested.

Primals in a Nutshell

2) relating to an early stage in evolutionary development; primeval.

“What sort of world is this?” is the oldest question in Western philosophy. I want to study how our gut-level answers to this question, what we call “primal world beliefs” or primals, influence our lives.

Primals are an individual’s simplest and broadest understandings of the world’s essence. They serve as automatic assumptions that provide a framework—a lens—by which we filter and interpret millions of bits of information we receive every day. Like all assumptions, primals involve a claim about something.  In this case, the claim is kinda weird because it’s (almost literally) about everything: what most things are usually like most of the time.  Individually, primals can be expressed as propositions like “the world is dangerous” or “the world is beautiful.”  Together, primals describe one’s cosmic situation, forming an implicit world which feels like “the real world” for each individual.  Philosopher William James described these worlds as, “our individual way of just seeing and feeling the total push and pressure of the cosmos.”

Primals theory has three basic tenets that are really quite simple.  First, every day, most people operate under the assumption that other people, including family, friends, and strangers walking down the street, live in the same world we do. They don’t. Though many details may be the same, we often perceive reality’s essential character differently. For example, I might see the world as sinister and ugly, and you might see it as benevolent and beautiful.  These worlds feel like totally different places.  The first tenet of primals theory holds that though we all grew up on the same planet, we live in different worlds.

The second tenet holds that different implicit worlds encourage different behaviors, resulting in many different outcomes over a lifetime.  Why work hard, for instance, if life’s not fair and will not reward you for what you do?  Why be curious if the world is usually boring and around every corner, as you guessed, is more of the same?  We suspect primals influence personality, politics, pathology, and parenting, as well as strengths, success, and split-second decision making—really any behavior or thought pattern that involves the world around you and some degree of ambiguity.  For example, the world is dangerous may influence a police officer drawing a weapon on a suspect, an entrepreneur starting a business, a nervous boy asking a girl out on a date, or a toddler exploring a room.

A third tenet holds that millions of us may have unwittingly imprisoned ourselves in maladaptive implicit worlds that lead us to act in ways that support fear, injustice, and suffering.  For example, by seeing the world as a dog-eat-dog world, we create a more competitive and cruel environment.  Moreover, millions could also benefit from understanding the implicit worlds of ourselves, family, friends, bosses, and employees.  For example, Sarah, one of my interns this year, noted that she struggles to get along with her sister because while her sister tends to see the world as super safe where things naturally tend to work out, Sarah sees a place where things naturally tend to get worse and that’s just the way things are.  My hope is expressed by philosopher and psychiatrist Dr. Chandra Sripada,

Right now, primals seem to form in people largely without our awareness. If this project can give nothing else to the world, I hope it affords the opportunity for all of us to form our implicit worlds with eyes wide open and make conscious choices about what we want to believe and what we want to pass on to our kids.

I find that many people don’t “get” the primals concept until we start talking about what beliefs about the world they want to pass on to their children.  Often people want to pass on the view that the world is beautiful, fascinating, and improvable.

From the perspective of a research foundation, primals research is in the funding ‘sweet spot’ of being new(ish) and super promising, but not super risky.  I’ll explain.

Three primals have already been explored by psychologists enough to know that they can be measured and they matter. Belief that the world is fair, for instance, is unsurprisingly connected to working harder, being nicer, trusting people, and bouncing back.  In a particularly cool study on the belief that the world is dangerous, scholars found that cops who see the world as dangerous are more likely to shoot innocent people in shooting simulations. Seriously, those who scored high on a self-reported sense of general danger made more automatic reflexive decisions within a 0.63 seconds time window to shoot members of a perceived “out-group.”  In other words, at least some primals seem to matter.

Still, we know very little. Though current literature demonstrates that primals are measurable and meaningful, implicit worlds remain under-examined, unidentified, and unmapped. Only three primals have been studied (we are currently trying to measure 22 more), no primals classification exists, experimental research on primals is negligible, causal relationships remain unknown, no attempt has been made to identify primals conducive to human flourishing, and this lack of classification condemns the field to inefficiency. As it stands today, a researcher will occasionally bump into an interesting primal, define it idiosyncratically, and examine it en route to understanding something else, like prejudice or trauma, and not talk to researchers in other areas. As a result, how primals ground interactions with our environment remains a mystery.

This, in our view, is silly and solvable (and super interesting).  My main contribution has been merely to convince Marty, Templeton, and other scholars that primals are cool, a separate category of beliefs, worth studying in their own right, and that understanding them could allow us to improve the human condition.

To explore this further, Templeton gave us a grant last year to figure out what to do next. At first, our task struck me as strange.  I was under the impression that research foundations give out research grants, right?  But apparently sometimes they give out “planning grants.”  Templeton does this when they think that an idea could be huge, but needs further thought.  So our job, rather than doing new empirical research, was to figure out how one might turn my little baby idea into a concrete multi-million dollar research program–a nerd’s dream.

The remaining posts in this series describe outputs from this year (i.e. what we did) and our plans for the future, starting with output 1: hosting a scholarly retreat. 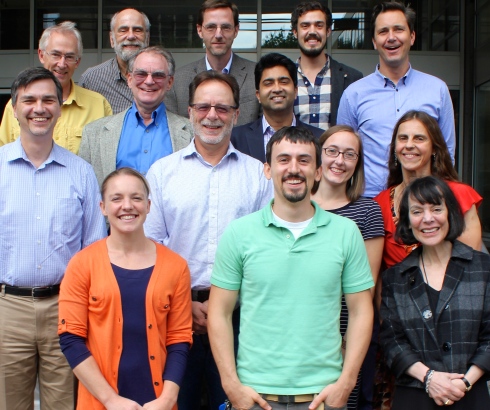 Here’s the folks from the 2014 Primals Planning Retreat.  Anyone you know?  In the next post, I’ll introduce you.

Look up, friend. The world is too beautiful for my eyes alone. END_OF_DOCUMENT_TOKEN_TO_BE_REPLACED
This entry was posted on Thursday, August 27th, 2015 at 12:48 AM and tagged with beliefs, Positive psychology, primals, Seligman, Templeton and posted in primals. You can follow any responses to this entry through the RSS 2.0 feed.
« Should we study “the world is vast”?
My Nerd Dream Team »