An Idiot’s Bill of Rights

If blogging has taught me anything, it’s that the universe cares deeply about my every thought and feeling.

If I would have fallen asleep a year ago, and had a dream about what my life would be like now, waking up I would have pressed myself, “Jer, you really need to work on your pride issues.”  Details be damned: basically, I’ve won the people-pleasing Super Bowl and I want to talk a bit about what life is like on the other side.

In short, its not much better.  In fact, I noticed that my initial euphoria quickly melted into your run-of-the-mill stupefying fear.  Effort has become an opportunity not to live up to my potential.  Because there seems to be no available trajectory but down, it feels like a good time to abandon all meaningful pursuits and join the circus.  (I ‘ve day-dreamed about becoming a full-time bike messenger.) 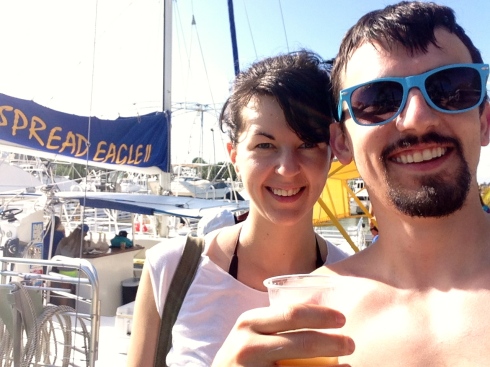 This is a pic of Alicia and I in Puerto Rico the day after Christmas 2013. We went on an all-day snorkeling trip with unlimited free alcohol on a sailing catamaran and I documented my first time having a pina colada at 9AM for posterity.  My point: don’t take these reflections too seriously. Life is  good.

My problem?  Carol Dweck, a psychologist at Stanford, might call it a “fixed mindset.”  She’s done a great deal of research unveiling the effects of implicit beliefs about where one’s talents and abilities come from.  In the first option, we see our talents and abilities as largely set in stone.  We don’t want challenges, as they are opportunities for failure.  And if at first you don’t succeed, give up quickly cause you clearly don’t have it.

Alternatively, we can adopt a “growth mindset.”  In this view, failure is not failure.  Everything is an opportunity for growth.  Results are not defining because things change, and if you work hard you can get better, grow, and learn more and more.  Fixed mindsets have been tied to a whole bunch of stuff nobody wants, like struggling in school, and growth mindsets are generally helpful in your professional and personal life.

Carol Dweck has been working on implicit beliefs for decades. I’m thrilled that she has also taken an interest in my UA work.

One of the ways we get fixed mindsets, ironically, is from  praise.  Praise for ability seems to actually undermine how persistent we are in our efforts (“Johnny, you are so smart!”).   Meanwhile, praising effort and strategy encourages trying and trying hard, at least in school-aged kids (Mueller & Dweck, 1988).

Are you fixed or growth?  I think I’m likely somewhere in the middle, but lately I think I have been seduced by lavish praise into a fixed mindset.  I remember after the subway thing how everyone and their mom was calling me a hero for a few weeks.  Then it stopped.  Believe me, I understood those guys who go out and push people onto subway tracks themselves so that they can save someone again.  Extravagant praise of talent and ability is addicting, and, if Dweck is right, corrupting.

Some of you are probably thinking, “hah!  Woe is Jer!  It must be so hard that everyone likes you.”  I would say, “absolutely!  Ridiculous, right?” and then kick you in the shins (as loving friends do).  Stop being small!  Winning the lottery ruins people’s lives (overstatement of Brickman et al, 1978 and other studies).  Winning the lottery of public opinion can as well.  Take it from somebody who has somehow made it to the top of magic mountain (of people-pleasing…not money…I have a ways to go in that other rather worthless pursuit).  The view is not as satisfying as I thought it would be.

One symptom of my hardening fixed mindset (and probably other stuff like being busy) has been blog silence.  I continue to have interesting ideas (I designed a company over Christmas break that would be a full-service fake vacation provider), but are they interesting enough to raise people’s opinions of me?  A dollop of paralysis is sometimes all one needs to avoid trying.

So get rid of it!  I think the first step is to boldly declare my rights, not only as a learner, but also a buffoon.  Dweck’s research, blah blah blah…I really miss allowing myself the freedom to be an idiot.  The guy who will occasionally accidentally pee in the trash can instead of the toilet, who will bike with his arms out like he’s flying, who will unknowingly put the car in park and turn it off at a traffic light if the conversation is interesting…I like that guy and people who are like him.  Thus I solemnly declare that idiots everywhere have  fundamental human rights:

Ahh…what a wonderfully freeing exercise!  Thank you internet for your cathartic caress.

But for me utility of this exercise is not just augmenting a present emotional state.  I’ve observed that time and time again what has helped me get over myself, whether it be negative feedback (having a manuscript rejected by 50 publishers) or positive feedback (being the highest-rated speaker at a conference),  is not to ignore feedback or stop caring what other people think–that’s mental illness–but to refocus on the work itself.  Declaring my rights as an idiot helps me do that.  Declaring my rights as an idiot gets me back to content.  Fortunately my work is  damn fascinating.  Usually all it takes is a reminder.

Some people use alarm clocks.  I use my wife.  After five years of marriage, Alicia continues to amaze me, not only because she lovingly kicks my ass with verbal reminders (my masters thesis was languishing before she stepped in), but is herself an example of growth mindset everyday.  While we were in Peurto Rico, I took her boogey-boarding for the first time.  Now, she would be the first to admit that she is not terribly athletic.  True to form, at first she was horrible, really quite impressively bad.  Then she got better.  Then she got good.  And boogey-boarding became a meaningful daily laugh-fest for us.  On the final day, she wore me out, and as the sun set I watched her ride waves and reflected on how lucky I was to have her.  She knows her rights as an idiot, I realized, and those same rights protecting her can protect me (and you) too.

Alicia with her boogey-board is the tiny silhouette on the right.

All are free to be life-loving fools.

Look up, friend. The world is too beautiful for my eyes alone. END_OF_DOCUMENT_TOKEN_TO_BE_REPLACED
This entry was posted on Monday, January 20th, 2014 at 1:04 PM and tagged with Carol Dweck, catharsis, coping, fixed mindset, growth mindset, mindsets, negative feedback, positive feedback and posted in Alicia, Personal, positive psychology, psychology. You can follow any responses to this entry through the RSS 2.0 feed.
« Stutterers Revenge Part VII: Jer Strikes Back on Live Radio
Nothing like a little brush with death to provide some perspective on life… »

13 responses to “An Idiot’s Bill of Rights”