These days I am writing grant proposals, applying to grad schools, and reading about the history of psychology.  But I thought I would take a little break from universal assessments to add a new installment to the “Old Jer Ideas” series.

Individuals are products of their environments.  Overstatement?  Yes.  Interesting?  Not really.  We’ve heard it before.  What’s more interesting to me is how communities, and especially the nuclear family, are products of the environment too.  One factor that plays a huge role in forming our community is also often overlooked: the physical buildings  we live in.  For example, Paul Rozin at the University of Pennsylvania thinks that French people get more exercise via walking because getting the car out involves opening manual parking garage gates.  Walking is just easier.  The physical environment encourages healthy behavior across time.

This is the main insight of Dan Beuttner, founder of Blue Zones.  He’s travelled to the happiest and longest-living communities on the planet and written books about it.  It turns out happy communities don’t read self-help books or go to the gym.  Rather, their lives are designed (often accidentally) in such a way that incentivizes routines that includes exercise, community-building, and other healthy habits.  I got to work a bit with Dan and Blue Zones last year.  They have packaged a series of customizable changes (hundreds of options) that communities can use to encourage healthy behaviors and are using them to change the world one community at a time.  Currently they are working  with the governor of Iowa to make simple changes to communities across the state. Two environmental change examples: 1) instead of encouraging people to exercise, town governments can connect all sidewalks, which is tied to X more time spent outside and X more calories burnt a year, 2) instead of encouraging people to “eat less you idiot and you’ll stop being fat,” individual families can replace their 12-inch dinner plates with 10-inch plates, which results in X less pounds of fat gained each year.  In this way, they identify heaps of super easy changes to the environment which produces effects that aggregate across a lifetime.

This, it turns out, is the same principle my colleagues and I used to revitalize inner-city neighborhoods.  You can’t tell slumlords to be better people, but if you make the street a sensible investment, they will often want to fix up their properties on their own.

So, can we apply this same principle of changing the human environment to the buildings in which we live?  I think so.  I think we could design living arrangements highly conducive to holistic human flourishing.  And I have.  It’s called the Clifton SexPlex!  (Note: it’s not an empirically verified positive intervention and could be hazardous for your health.)

First, its great because it has “sex” in the title.  Second, its great because I thought of this idea and told all my friends about it before I knew anything about positive psychology and the science of human well-being and they gave it this awesome name.  Third, its great because of what it is:  a small apartment building for six families intentionally designed to strike a balance between the commune and the individualist’s free-standing castle.  Several friends have already claimed spots (I’m talking about you, Dan & Grace Black).

Context: I grew up in Taiwan and Hong Kong.  Everyday, on the way to school, I biked past rice patties. 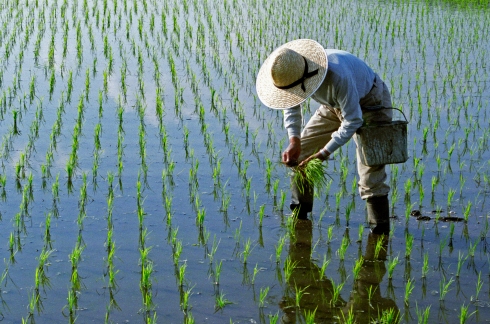 At the center of these rice patties were often traditional Chinese compounds.  As generations grew up, farmers would add buildings around a common square until three or four generations lived not quite in the same house but not separately either.

Right next to the compound I passed each day was their family graveyard (connection to community across time) and a sacred Banyan tree (connection to community across dimensions) (that, sadly, I couldn’t show Alicia when we visited Taiwan last summer.  The compound had been knocked down and all the rice patties cleared for construction : (  On the plus side: I got some real night market food!)

Jer getting some seriously awesome sweet Taiwanese sausage at a night market in Taichung, July 2013.

These family compounds are a typical Chinese model (this guy calls it the “chinese unit”).  Often walled, they were useful in defending your family against petty banditry and wild animals.  Below is a typical layout.

Indeed, even in major cities.  This arrangement, living groups of 20 or so in substantial family compounds, was the norm. 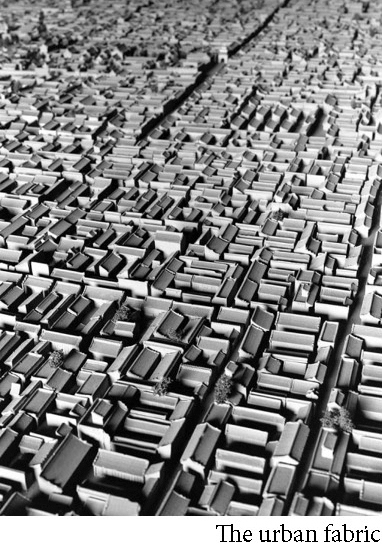 After finishing college in 2007, having lived in apartment buildings, dorms, row homes, and townhouses, I became a community organizer in inner-city Buffalo and discovered the monolithically individualistic architecture of America that permeates suburban and urban space.

By day, I was becoming an expert in catalyzing revitalization in struggling inner-city neighborhoods.  By night, I donned an intellectual cape and form-fitting spandex in order to effectively think about what sort of community I wanted to live in.  I wanted more.

The problem, as I see it, was that I was afflicted with affection for other humanoids.  I liked them.  I wanted to be with them.  But I was now a young adult doing two very mature grown-up things: 1) I was too busy and never had time for friends even if they lived just blocks away and 2)  all social interaction happened in the context of planned events that went on your calendar in advance and involved an enticing (often fattening) activity that you very well might not be in the mood for.  What happened to “hanging out,” to non-planned interactions that had the potential to be uninteresting or food-less?  They’re gone.  Now we pull on cardigans, go to non-routine special times, stay on our best behavior, drink a bit so that we don’t feel how weird it all is, and chat with nominal strangers.  The prevalence of social anxiety in modern America makes sense to me when every “community-building” activity is a stage for showmanship.  And thus we lose out on the deep desire of our hearts: the most basic awareness that a dozen or so good people know you deeply, desperately want to keep knowing you, and want you in their group.  In real community, the show has to stop sometime.  That’s kinda the whole point.

More troubling, I was shocked at the remarkable and seemingly preventable dysfunction that pervaded my friends’ nuclear families.  Sociologists tell us that small groups are always inherently unstable (I could cite this but I’m lazy).  They have fewer connections, so when one goes bad (for example, your brother pisses you off for getting you in trouble), you have more people to mediate reconciliation.  But beyond mere group size, the modern American family lends itself to dysfunction because they often have 1) no access to the inner-working of how other model families live and 2) no feedback from outsiders bout how they treat family members and each other.

All of us fall into dysfunctional patterns without realizing it.   We need feedback.  Loving effectively depends on it.  Indeed, perhaps the most important benefit of two-parent households is the check on executive power.  One parent, who obviously really knows the situation well, can say to the other, “Honey, in all honesty, are you sure how you are treating junior is constitutional (or in keeping with our desire to avoid smothering our child)?”  To put it in another crude way, families need outside consulting.  Once, when Alicia and I had a little tiff in public, a friend told me that it was triggered by me inadvertently signaling disrespect.  This single piece of feedback helps our relationship enormously everyday when it consistently engenders in me humility whenever Alicia responds emotionally to what, I thought, was  “clearly” an unemotional question.

So, adrift without feedback for decades on end, small American families form little dysfunctional worlds.  Kids often don’t realize the extent of this dysfunction until they go to college, start their own families, or get married and gain perspective on their own family dynamics via the foil of discovering the family patterns of their in-laws.  Then they start their own family in near total ignorance having known the inner-dynamics of approximately two insular families.  This seems an entirely stupid way to design a flourishing society.  (Fortunately I am overstating all over the place.)

And besides curbing dysfunction and encouraging non-planned social time, I want inter-generational friendships.  I want adult mentors for my kids that are neither educators or family members, and a host of other benefits that come with village-like life.

So I want intentional community, but not the way weirdos do it.  I want to build the modern urban version of the traditional Chinese farm compound.

Don’t get me wrong.  Community is messy.  People piss each other off.  The SexPlex would have plenty of drama and conflict.  My solution?  I have none.  Getting along is a crucible for growth.  I need to be more humble anyway.  I need to learn to share anyway.  I need to mature.  I need to get better at loving my family.  And I need to relentlessly pursue engagement and cooperation as an example to my kids.

Obviously, most of these ideas are not new, but perhaps my specific take on it is.  The Clifton SexPlex could have something to offer the world besides the unfortunately rapey name.  Now I just need to build it.  Which is where you can help!  Please make your checks payable to…or rather just keep an eye out.  We may be moving to Philly next year.

Look up, friend. The world is too beautiful for my eyes alone. END_OF_DOCUMENT_TOKEN_TO_BE_REPLACED
This entry was posted on Friday, November 15th, 2013 at 4:58 PM and tagged with Architecture, blue zones, Clifton SexPlex, community, Dan Beuttner, intentional community, Old Jer Idea, Positive psychology, rice patty, traditional chinese compound and posted in Old Jer Idea. You can follow any responses to this entry through the RSS 2.0 feed.
« The First Philosophy Debate Ever
Stutterers Revenge Part VII: Jer Strikes Back on Live Radio »

9 responses to “The Clifton SexPlex”